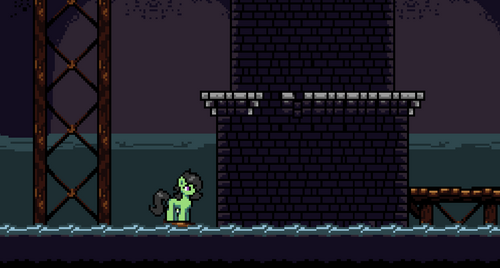 Time for some monthly ramblings. To internalise my own workflow, and to keep people who are interested in loop. Its also good to just, keep my self accountable for how I spend my time on this project.

So first of, hitting milestones here. My games got a combined total of 10k views. that's like a lot of people.

We got some boost. Equestria daily and horse news did reports on the game around the start of this month, that was a big boost for a day. And late august the derpibooru advertisement went live, which was HUGE, those guys did it for free just to support the community, that is super wholesome. Buying advertisement slots there in the future would absolutely give a return of investment, and its also a good opportunity to support derpibooru.

What happened with the development? A good starting point is last months post here I planned out the month. This post to be precise, I'm going to break it down into quote blocks and comment on them.

What will happen is a new stage, and will be Patreon exclusive up until release. Its expected it to be playable mid to late July.

Welp. About half of stage 2 got released by the end of the month. Although there was a demo mid July where you can fight the Lizzer enemies.

But mostly its going to be boring stuffs. Like bug fixes, and dealing with code debt to ensure that the development process is easy to manage as the project grows. Its the most fun part of development for me, but its not very exciting to share.

The big one is a new and flexible animation system so I can easily add new animations into the game and give them game-play properties without having to edit and implement it at four different places.

Yup, the new animation system is in, and its fantastic. I was able to make a fairly complex new enemy in a few hours of work. Which is crazy. Its flexible enough so I can continuously add new features into it as needed, its suspect it is going to turn out into my secret sauce and up the enemy variety of the game in the process.

Patreon rewards will be revised for the next month. More goodies that should not get in the way of the development of the game. Also, you will be given priority and a small discount if you decide to commission an animation of me.

I love you guys, but it didn't happen. See the problem with patreon rewards is that I don't want to lock into something that might end up cut from the game. I'm not completely sold on having the town in the game, Its probably going to be there. But if I decide that the game would be better of without it, I will be put in an awkward spot because I have people who donated me actual real life dollars to be featured there. And thats a really dumb position to be in. Because while I owe the patreons their rewards, I also owe everyone, patreons and otherwise, who put money down, to make the game the best it can be. So that is why, I have not revised the patreon rewards yet.

Other Stuffs that got Made

Some new environmental things. We got floating boxes, slippery slops where you only get to go down, and a couple new enemies.

I wrote a post about how I go about animating things. https://mcpalm.itch.io/fillyastray/devlog/90500/making-a-new-enemy-part-1
Its supposed to be part one in a series. Where part 2 is me implementing it in the game. I started working on part 2, but its just not a good read, so its on ice for now.

Oh, me and Bizarre made a different game as well. https://mcpalm.itch.io/suga-moni-adventur Its absolutely awful. And no, it didn't take up much of my time at all. Sometimes I just need to, clear my palette with something stupid.

Okay. So. Next month.

Wrap up stage 2. its on the top of the bucket list now. This means designing new stages. Adding new enemies, and playtesting. I dont have a good estimate. But when I put it like that. probably like two weeks. A week and a half for content creation. half a week for the playtest feedback loop.

More Tech! We got plans on some light RP systems. Just to spend your money and reward people who explore every nook and cranny of the game. This will mean

Yeah, that's probably gonna take up all of August if not more. But the goal is to have it all playable by the end of the month.

Patreons should check out the patreon for a poll. Original Species ahoy, the options are Pizza Pony, Moth Pony, Squid Pony and Snake pony, you got a few days to make your voice heard. Moth Pony is currently winning.

I also got a rather large commission for something else. So that will take up some of my attention.

Either way, lots of stuff is gonna happen this month. And thanks to all of the support, I know I can make it.